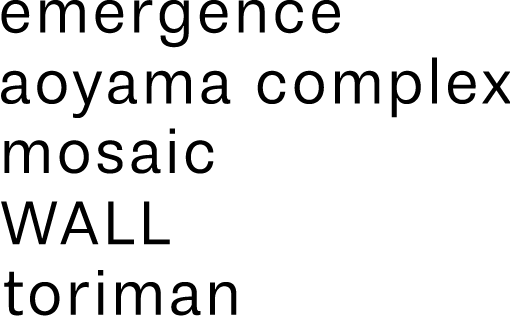 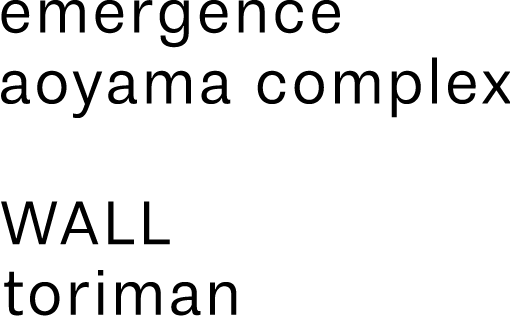 mosaic is a large space that can be rented in Minami Aoyama. It can be used for exhibitions of contemporary art, new releases of fashion and cosmetic brands, and exhibitions of cars and motorcycles.

For inquiries regarding space rental, please contact the following. 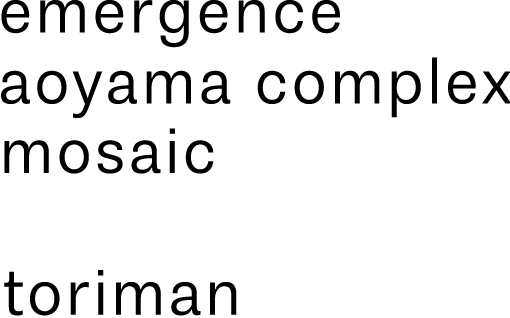 WALL is a cafe-bar where you can relax while seeing many contemporary art works, centering on the wall decoration"Vertical Garden" by Patrick Blanc. We are specialized in selecting original cocktails, champagne, wine, and cigars, and while offering high-quality menus, we are also planning unique events at the space.

●emergence: toward a new aesthetic
In fields ranging from philosophy to evolutionary science and systems theory, the term emergence is used to refer to phenomena in which interactions between individual elements comprising a whole generate unexpected changes in the properties or behavior of that whole. Observed in almost every organism and thing there is, emergence has been the driving force behind the evolution of the world.
The development of contemporary art can itself be considered an emergent phenomenon. While responding to advances in technology and shifts in cultural values, contemporary art produces its own, autonomous dynamic by proactively incorporating new ideas that cannot be contained within existing institutions or modes of expression.
●emergence：synthesis with nature
Over the past few centuries humanity has continued pressing on with industrialization in pursuit of ever greater wealth, but it has come at the cost of the destruction of nature and the environment. Concepts such as carbon neutrality have rapidly caught on in recent years as we have begun searching for new ways of coexisting with our ecosystems. This too could be seen as a form of emergence. Both the emergence aoyama complex and emergence fukuoka are expressions of nature’s synthesis with its antithesis, industrialization, as represented by architecture.
●emergence：Aoyama and Fukuoka
「emergence seeks a new understanding of aesthetics in the juxtaposition of nature and contemporary art. Combining a gallery, bar, and fashion boutique, and a bar and boutique, respectively, both the emergence aoyama complex in Tokyo and emergence fukuoka feature permanent installations of vertical gardens by Patrick Blanc (b. 1953) alongside works of contemporary art.
Also hosting and webcasting art-related events, both spaces will function as dialogic communication hubs for the emergence of new paradigm shifts in art by involving not just art audiences but visitors who are drawn to fashion as well.